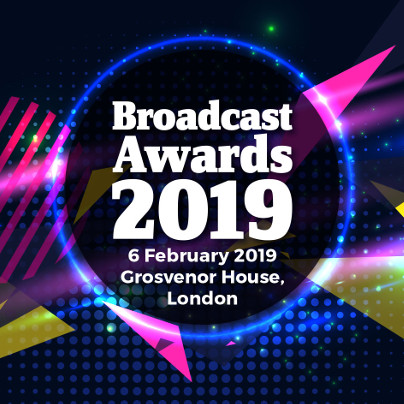 The shortlist for the 2019 Broadcast Awards, which celebrates the best of British television, have been revealed, and we are very excited to announce that Molinare has again been shortlisted in the ‘Best Post Production House’ category.

On top of that, three productions that have been post-produced here at Molinare have been shortlisted in their genre categories, and two production companies that we have worked with this year on high-quality projects have also been shortlisted, in the ‘Best Independent Production Company’ category.

The smash-hit drama Bodyguard (World Productions for BBC One) was nominated in the ‘Best Drama Series or Serial’ category. We completed both picture and sound work on the show that everyone is talking about, with sound design by Dan Johnson and Marc Lawes, online editing by Nick Anderson and colour grading by Gareth Spensley.

Bodyguard is the 6-part contemporary thriller starring Richard Madden as Police Sergeant David Budd, a war veteran suffering from PTSD, now assigned to work for the Royalty and Specialist Protection Branch of the London Met. He is assigned to protect Julia Montague (played by Keeley Hawes), the home secretary whose politics stand for everything he despises…

Married to a Paedophile (Brinkworth Films for Channel 4) has been shortlisted in the ‘Best Original Programme’ category. This groundbreaking doc delicately captures the shock and the aftermath of the affected families, by casting actors who lip-sync the voices of all five real-life contributors precisely down to every breath. Mixed by Greg Gettens and Kim Tae Hak, online editing by Laurence Thripp and grading by Andrew Daniel, Married to a Paedophile became one of our most innovative projects to date.

World Productions, the team behind Bodyguard, and Sid Gentle Films, who produced Killing Eve, have both been shortlisted in the ‘Best Independent Production Company’ category.

The awards take place at Grosvenor House, London on 6th February 2019. Congratulations to all of our team who worked so hard on these projects and good luck to all of our friends in their respective categories.